Virtually every NBA fan recognizes the name of former Boston Celtics superstar Sam Jones, and most know about former NBA player and current analyst, Jalen Rose. But they may not know about the late Jimmy Walker and his connection to both Sam and Jalen. Most of the following information is derived from author Marc C. Bodanza's excellent bio of Sam Jones, Ten Times a Champion. Jones noticed budding basketball star Jimmy Walker when Jimmy starred at Boston Trade High School while Sam was playing for the Celtics. Jones wanted better things for Walker, and paved the way for Jimmy to attend Sam's alma mater, Laurinburg Institute in North Carolina, even paying his tuition. 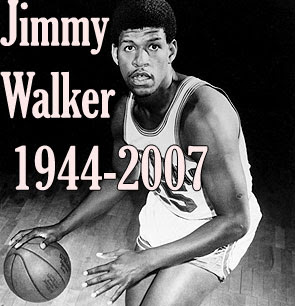 Walker moved on to Providence College where he played under Coach Joe Mullaney. He had a stellar college career, setting a school record of 2,045 points-scored in three years, a record finally broken by future-Celtic Ryan Gomes in 2005.

Walker was picked number one overall in the 1967 NBA draft by the Detroit Pistons and had a fine career, earning two appearances in the All-Star game. Jimmy died in 2007 at the age of 63, but not before fathering a son, Jalen Rose, whom he never got to meet. Jimmy left before Jalen's birth. Walker's death came just a month before a scheduled meeting with his son (per Marc C. Bodanza from his book):

Sam (Jones) received a letter from Jimmy Walker only weeks before Walker's death. In the letter, Jimmy described his excitement about the planned meeting with his son. Rose inherited his father's athleticism and basketball talent. Rose and Walker, the only father-and-son team to each score 10,000 points in the NBA, never had a relationship as father and son.

I had the pleasure of meeting and interviewing Sam Jones and Marc C. Bodanza last year. They are similar in the sense they are both soft-spoken, with no flash or fanfare about them. I watched Sam perform many times at Boston Garden, and he was often a quiet assassin to opponents on the parquet. Marc's writings are simply gems. In my one-on-one interview with Sam, I asked him if he ever has spoken to Jalen Rose about Jalen's dad, Jimmy Walker. He answered,

"If he wanted to hear more about his (Jalen's) father, I would probably be the best one to speak with. I gave him my phone number, and that's where I left it."

Stay tuned for more on my interview of Sam Jones in future articles, such as the "April Stools" on-court attack by Wilt Chamberlain, and Tommy Heinsohn being Red Auerbach's whipping boy. Stay with us while the NBA works on getting back to action.
NBA, NBA, Sam Jones
Prev Article Next Article

Can the Celtics Claim the East?